Metal to Plastic: Why more OEMs are simplifying and lightening the load

This heavy duty mount is more versatile and easier to assemble than the twin metal P-clamps it replaced.

Steel and aluminum have enjoyed popularity as the materials of choice for automotive components since the dawn of the industry itself. It’s a love affair that seemed unbreakable – until manufacturers like HellermannTyton began showing off the virtues of engineered plastics.

In some cases, that’s true. But often, plastic results in a better version of a component. The idea of converting parts from metal to plastic (M2P) began as a way for manufacturers to cut costs. As material science matured, we discovered additional benefits.

For one, metal is limited in terms of potential shapes. It can only be bent in so many ways. In complex applications, multiple metal parts must be joined together, usually with fasteners, all of which increase costs and assembly time. Sometimes, these assemblies require a metal fastener for mounting – further interrupting productivity.

Alternatively, plastic is easily injected into an intricate mold, allowing design engineers the freedom to improve upon metal’s limitations with a single part. Mounting screws can be replaced with press-in fasteners such as integrated fir trees or arrow heads.

What’s driving the push to plastic?

For the automotive market, certain mega-trends have impacted the way we think about managing the increasing amount of onboard tech.

Autonomous driving – Radars, lidars, cameras and other high-tech components need to be mounted to something, with lots of wires being routed throughout. The vehicles haven’t become bigger to accommodate these systems, so the engineering advantages of plastic are increasingly clear.

Electrification – Range anxiety wasn’t an issue just a few years ago, but drivers of today’s electric vehicles are keenly aware of their limitations. Because of this, light-weighting continues to be a priority.

Steel and aluminum weigh more than plastic. The average vehicle is steadily becoming lighter thanks to plastic replacement parts. Those lost pounds translate into better fuel economy and greater range. 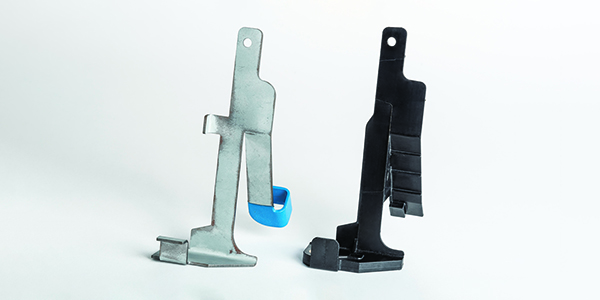 This metal-to-plastic conversion reduced the part’s weight by over 77 percent.

Could plastic parts eventually replace all metal ones?

To be a true partner to our customers, we look at the given application to see if M2P makes sense. If it does, we consider whether or not the new part can do more than the old solution (such as reduce the number of parts in an assembly).

We’ll be the first to admit, for now, metal is the best material for some automobile parts. And depending on the strength requirement, it may be impractical to convert a metal part to plastic.

Even with our toughest polymers, it’s not always a matter of duplicating the shape of an existing metal part. We may need to engineer reinforcements into the part to achieve the desired rigidity, tensile strength or impact resistance. If the solution would be bulky or less reliable, it’s not worth pursuing.

It’s easy to remain optimistic when you have resources like ours. Working directly with our material suppliers, HellermannTyton’s design engineers love a challenge. We’re leading the charge in M2P conversions, and the next breakthrough is just one inspiration away. 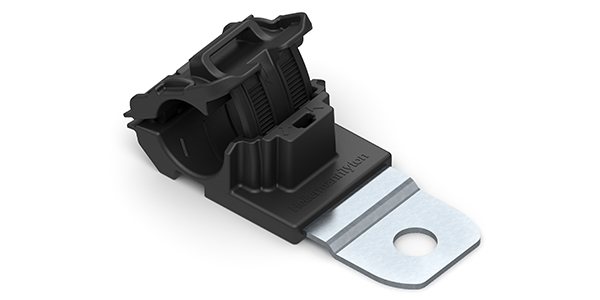 Our popular Ratchet P-Clamp replaces multiple metal P-clamps because it adjusts to fit the bundle or tube size.