Our country websites
Home > About > History 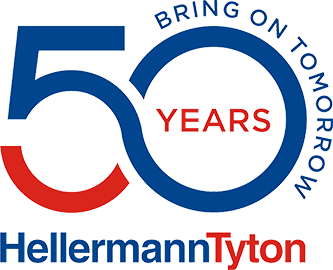 An international manufacturer, HellermannTyton’s roots extend back to 1935. We came to North America in 1969. At that time, our name was Tyton Corporation of America, and our sole product was cable ties. A half century later, we produce thousands of industry-leading cable management, identification and data solutions. Every day brings exciting opportunities to help our customers thrive.

The history behind HellermannTyton

Wherever power flows along a wire or data is transferred along a fiber-optic cable, a HellermannTyton product is never far away. Built on an inventive legacy that began in Germany in 1935, the company is now one of the leading global manufacturers and suppliers of products used to fasten, bundle, connect, insulate, protect and identify electrical and data cables in buildings, in the ground, in machinery and in vehicles.

HellermannTyton still sells products like the ones founding father Paul Hellermann invented to protect cable sheaths from damage. Inspired by the tiny rubber tubes in Woods/Dunlop type bicycle valves, he probably didn't imagine just how big his 1935 Hamburg start-up would grow when he started marketing his three-pronged pliers and chloroprene rubber sleeves.

Today, the HellermannTyton brand is synonymous with a comprehensive portfolio of high-quality products, cable management expertise and professional service to engineers and technicians around the world.

1935–1959
From the Hellermann Binding System to plastic cable ties

Electrical wiring in the early 1930s was encased with rubber and bound with cotton thread. Paul Hellermann (1886–1958) devised an ingenious system for easily stretching rubber sleeves over the cable sheaths to prevent the ends from fraying.

Paul Hellermann GmbH was founded in 1935 in Hamburg. The company manufactured and sold three-pronged pliers and chloroprene rubber sleeves and grommets in various sizes.

In 1938, Hellermann extended his business to the UK in a joint venture with Jack Bowthorpe (1905–1978). As wiring became increasingly complex, Hellermann Electric Ltd. and a string of Bowthorpe Hellermann companies were ideally placed to serve the wiring needs of the booming post-war aerospace, automotive and electrical industries. The company was one of the first to offer a numeric marking system on colored cable sleeves.

Before his death in 1958, Hellermann sold his original company and shares in the British partnership to Bowthorpe, under whose leadership the company was quick to adopt plastic injection molding and extrusion technology. It was precisely the right time to capitalize on the advent of the plastic cable tie.

At the start of the 1960s, building on a decade of expertise dipping plastics, the Bowthorpe Hellermann companies were quick to adopt plastic injection molding technology. The Insuloid Manufacturing Company from Manchester – one of the UK’s first specialized manufacturers of cable ties made from thermoplastic (polyamide 6.6, or “nylon”) – was acquired and amalgamated into Hellermann Ltd. in 1964. The Insulok LK range of cable ties became the foundation of the T-Series ties, still sold by HellermannTyton today.

The widespread international acclaim earned by Tyton and Kabelrap was reflected in the globe added to the modernized company logo from 1967.

When sister companies were established in the United States in 1969 and in Japan in 1970, these businesses were registered under the name Tyton.

Fastening, bundling and marker expertise was the foundation for success in all industries around the world

The company began adding customized product development and highly skilled thermoplastics engineering to its offering in key markets. It also embarked on an unprecedented phase of international growth. By the end of the 1990s, Hellermann had established local representation in 27 countries and extended its manufacturing capabilities to all global regions.

The new millennium commenced with the introduction of the harmonized company name “HellermannTyton” for all business units around the world.

A strong reputation as a manufacturer and supplier of quality cable management products and success as a development partner for custom thermoplastic components has enabled HellermannTyton to consistently outperform baseline economic growth year-over-year. Manufacturing capacity has been successively increased in step with customer demand in all global regions.

The company floated on the London Stock Exchange in March 2013. Just over two years later, Delphi Automotive Systems PLC made a successful bid to purchase the company. HellermannTyton was subsequently incorporated into the Delphi Electrical/Electronic Architecture division in December 2015.

Since the parent company’s realignment as Aptiv PLC in December 2017, HellermannTyton is now part of the Signal and Power Solutions division developing cable assemblies for advanced vehicle systems but continues to operate under its own brand.

Besides the automotive sector, HellermannTyton is a key supplier of cable management products to customers in all other industries, especially aerospace, rail, machine and equipment builders, renewable energy and electrical installation.